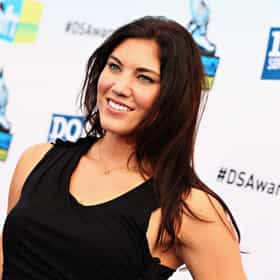 Hope Amelia Solo (born July 30, 1981) is an American former soccer goalkeeper. She was a goalkeeper for the United States women's national soccer team from 2000 to 2016, and is a World Cup champion and two-time Olympic gold medalist. After playing at the collegiate level for the University of Washington, she played professionally for the Philadelphia Charge in the Women's United Soccer Association (WUSA). When the WUSA folded after her first season, she traveled to Europe to play for the top division leagues in Sweden and France. From 2009 to 2011, she played in the Women's Professional Soccer (WPS) for Saint Louis Athletica, Atlanta Beat and MagicJack. After the WPS ceased operations ... more on Wikipedia

People Who Hope Solo Has Dated 28.7k views Hope Solo hasn't had many public relationships, but the ones she has had definitely drew major attention. Although the Ame...

Hope Solo is ranked on...

Hope Solo is also found on...