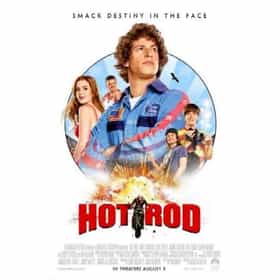 Hot Rod is a 2007 American comedy film co-written, directed, and starring members of The Lonely Island. The film stars Samberg as an amateur stuntman whose step-father, Frank continuously mocks and disrespects him. When Frank grows ill, Rod raises money for his heart operation by executing his largest stunt yet. In addition to raising money for the operation, he also does so to win Frank's respect. The film also stars Taccone, Sissy Spacek, Will Arnett, Danny McBride, Isla Fisher, and Bill Hader. The film was directed by Schaffer and distributed by Paramount Pictures. ... more on Wikipedia

The Most Hilarious Quotes From 'Hot Rod' 190 votes The best quotes from Hot Rod make you realize how funny the movie really is, even if you haven't seen it in a while. With th...

Hot Rod is also found on...