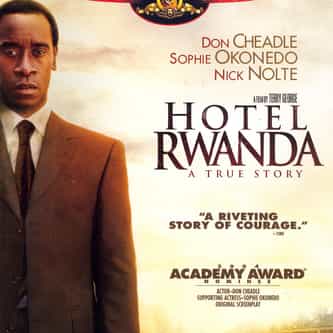 Hotel Rwanda is a 2004 American historical drama film directed by Terry George. It was adapted from a screenplay written by both George and Keir Pearson. It stars Don Cheadle and Sophie Okonedo as hotelier Paul Rusesabagina and his wife Tatiana. Based on real life events in Rwanda during the spring of 1994, the film which has been called an African Schindler's List, documents Rusesabagina's acts to save the lives of his family and more than a thousand other refugees, by granting them ... more on Wikipedia

Hotel Rwanda IS LISTED ON