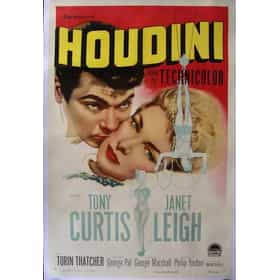 Houdini is a 1953 biographical film about the life of the magician and escapologist Harry Houdini, played by Tony Curtis, co-starring with then-wife Janet Leigh. It was made by Paramount Pictures, directed by George Marshall and produced by George Pal from a screenplay by Philip Yordan, based on the book Houdini by Harold Kellock. The music score was by Roy Webb and the cinematography by Ernest Laszlo. The art direction was by Albert Nozaki and Hal Pereira and the costume design by Edith Head. The film details a highly fictional account of Houdini's life. The film follows his most dangerous stunts and magic tricks along with his love Bess Houdini. The death of the magician is depicted ... more on Wikipedia

Houdini is ranked on...

Houdini is also found on...