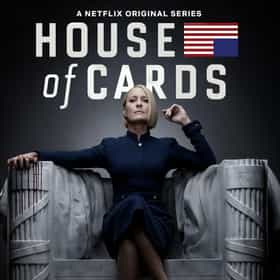 House of Cards is a 2013 American political drama television series developed and produced by Beau Willimon. It is an adaptation of the BBC's mini-series of the same name and is based on the novel by Michael Dobbs. Set in present-day Washington, D.C., House of Cards is the story of Frank Underwood, a Democrat from South Carolina's 5th congressional district and House Majority Whip who, after being passed over for appointment as Secretary of State, initiates an elaborate plan to get himself into a position of greater power, aided by his wife, Claire Underwood. ... more on Wikipedia

lists about House of Cards

Fargo
The Best Episodes of House of Cards 397 votes There are so many good episodes of House of Cards, but which ones really stand out? To determine once and for all what the b...
The Best House of Cards Quotes From Every Season 734 votes Here are the best quotes from every season of House of Cards, voted on by fans of the series like you. House of Cards made s...
House of Cards Plot Points That Happened IRL 5.8k views House of Cards doesn’t exist in a make believe world. It definitely taps into the real world of politics and power. Sure, Fr...
32 Facts You Didn't Know About House of Cards 159.2k views With a stellar cast and a production team that effectively launched Netflix's original programming, House of Cards is playin...
Ranking the Best Seasons of 'House of Cards' 110 votes This list features the best seasons of House of Cards, listed from best to worst with pictures of season posters when availa...
All the People the Underwoods Took Out (And Why) 4.7k views This list would like to take the opportunity to break the fourth wall and tell you that there are ~SPOILERS~ ahead. Watch yo...
Here Are All The Ways House Of Cards Could Write Kevin Spacey Out Of The Show 388 votes Kevin Spacey's sexual misconduct has finally gone public, thanks to actor Anthony Rapp, who alleges Spacey assaulted him whe...

House of Cards is ranked on...