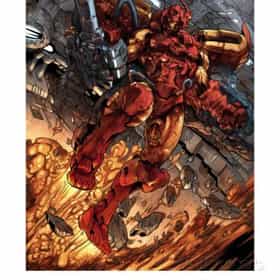 House of M is an eight-issue comic book limited series and crossover storyline published by Marvel Comics in 2005. Written by Brian Michael Bendis and illustrated by Olivier Coipel, its first issue debuted in June 2005 as a follow-up to the events of the "Planet X" and "Avengers Disassembled" storylines, in which the mutant superhero Scarlet Witch suffered a mental breakdown and tried to alter the fabric of reality to recreate her lost children. Scarlet Witch's father, Magneto, and her twin brother, Quicksilver, played major roles in the series. Like the The Age of Apocalypse, the House of M replaced the Earth-616 as the main reality for a brief time until Wanda ... more on Wikipedia

#3 of 33 The Best Marvel Crossover Events & Storylines Ever 16.3k VOTES It use to be that it was a very rare occasion for our favorite Marvel heroes to interact with each other in comic book stori...
#49 of 109 The Best Captain America Versions Of All Time 2.2k VOTES Captain America is one of the most prolific and long-running comic book heroes in history, both as a solo act and as a chart...
#14 of 54 The Best Versions of X-Men 3.4k VOTES The X-Men are easily one of the most iconic and recognizable superhero teams in the world. There are dozens of formats the c...
#36 of 51 The Best Punisher Versions Of All Time 602 VOTES A list of the best interpretations of The Punisher throughout comics, movies, TV, and more. Frank Castle is one of the few &...
#18 of 45 The Best Fantastic Four Versions Of All Time 525 VOTES The Fantastic Four is easily one of the more iconic superhero teams in the world. Created by the comic legends Stan Lee and ...
#50 of 101 The Best Iron Man Versions Of All Time 1.5k VOTES Iron Man is one of the most iconic superheroes in the history of comics, especially after Robert Downey, Jr.'s film adaptati...
#6 of 15 The Best Storylines Featuring Scarlet Witch 262 VOTES Wanda Maximoff, aka, the Scarlet Witch, has been a character in the Marvel Universe since she first appeared in the pages of...

House of M is also found on...