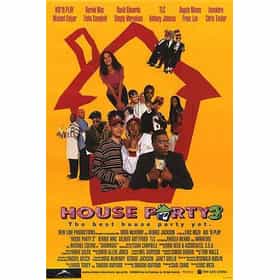 House Party 3 is a 1994 comedy film, starring Kid 'n Play and Bernie Mac and TLC. It is the third and intended final installment of the House Party film series. This was to be the last film in the franchise, making it a trilogy; however, a direct to video sequel, House Party 4: Down to the Last Minute, was released seven years later. This is also Chris Tucker's debut on film as well as the first film in the series that Martin Lawrence does not reprise his role as Bilal, nor was he mentioned. Also absent in House Party 3 are three of the members of the R&B group Full Force, who played the bullies in the first two films. Nineteen years later in 2013, Warner Premiere released House ... more on Wikipedia