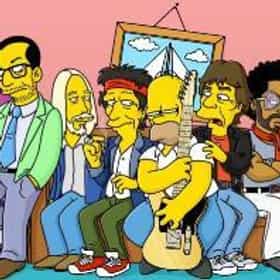 How I Spent My Strummer Vacation

When Homer can't pay for his beer, he finds alternate means for altering his consciousness. When he finally is given a beer, it puts him over the edge and into a cab home. His cab ride home is videotaped (a la HBO's Taxi Cab Confessions) and his family sees him complaining about them, the family got in the way of his dream to be a rock star. To help him get over these feelings, they send him to The Rolling Stones' Rock N' Roll Fantasy Camp. Homer, Barney, Apu and others learn how to be a rock star from the likes of Mick Jagger, Keith Richards, Elvis Costello, Lenny Kravitz, Brian Setzer, and Tom Petty. When his dream week is over, Homer is totally despondent; his rock star dream has ... more on Wikipedia

How I Spent My Strummer Vacation is ranked on...

#18 of 28 The Best Apu Episodes of 'The Simpsons' 898 VOTES Although it's hard to look at Apu these days and not see the controversy surrounding his character on The Simpsons, it'...
#10 of 22 The Best Episodes From The Simpsons Season 14 414 VOTES There are so many great episodes of The Simpsons in season 14, but which are your absolute favorite? This list ranks every e...