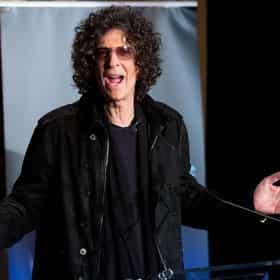 Howard Allan Stern is an American radio and television personality, producer, author, actor, and photographer. He is best known for his radio show, which was nationally syndicated from 1986 to 2005. Stern has been exclusive to Sirius XM Radio since 2006. Stern wished to pursue a radio career since the age of five. While at Boston University, he worked at the campus station WTBU before a brief stint at WNTN in Newton, Massachusetts. He developed his on-air personality when he landed positions at WRNW in Briarcliff Manor, WCCC in Hartford, Connecticut, and WWWW in Detroit, Michigan. In 1981, he paired with his current newscaster and co-host Robin Quivers at WWDC in Washington, D.C., ... more on Wikipedia

Howard Stern is ranked on...

Howard Stern is also found on...