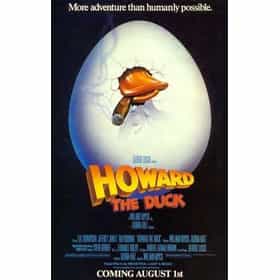 Howard the Duck is a 1986 American science fiction comedy film directed by Willard Huyck and starring Lea Thompson, Tim Robbins, and Jeffrey Jones. Produced by Gloria Katz and George Lucas and written by Huyck and Katz, the screenplay was originally intended to be an animated film based on the Marvel comic book of the same name, but the film adaptation became live action due to a contractual obligation. Although there had been several TV adaptations of Marvel characters during the preceding 21 years, this was the first attempt at a theatrical release since the Captain America serial of 1944. Lucas proposed adapting the surrealist comic book following the production of American ... more on Wikipedia

lists about Howard the Duck

'Howard the Duck' Is The Weird Fever Dream Predecessor To All Your Favorite MCU Movies 1.1k views Iron Man may have been the first Marvel Cinematic Universe movie, but the brilliant inventor might not be the oldest residen...
'Howard The Duck' Is Really A Metaphor For Cultural Assimilation 924 views The 1986 Howard the Duck movie is a Marvel Cinematic Universe origin-point that Marvel Studios likely wants to forget. Based...

Howard the Duck is ranked on...

Howard the Duck is also found on...

List of All Cult Classic Movies List of All Animation Movies Famous Movies Filmed in California Romance Movies and Films Lucasfilm Movies List List of All Movies Released in 1986 Movies with Cinematography by Richard H. Kline