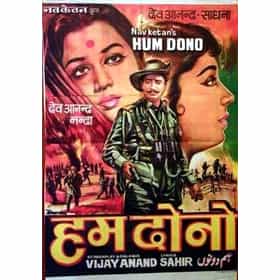 Hum Dono is a 1961 Hindi film produced by Dev Anand and Navketan films. Amarjeet is credited as the film's director, but producer and star Dev Anand claimed that it was his brother Vijay Anand, who directed the film, based on his own script. The film stars Dev Anand in a double role, and also has Nanda, Sadhana and Leela Chitnis. It has been relaunched in colour after exactly 50 years on 4 February 2011. The film is also known for its music by Jaidev and became a box office hit. The film was remade in Telugu as Ramuni Mechina Ramudu with N. T. Rama Rao. ... more on Wikipedia

Hum Dono is ranked on...

Hum Dono is also found on...

Romance Movies and Films List of All Movies Released in 1961