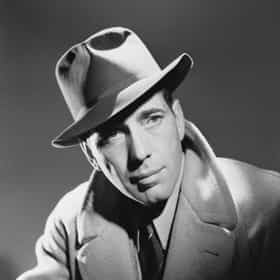 Humphrey DeForest Bogart (; December 25, 1899 – January 14, 1957) was an American film and theater actor. His performances in numerous films from the Classical Hollywood era made him a cultural icon. In 1999, the American Film Institute selected him as the greatest male star of classic American cinema.Bogart began acting in Broadway shows after World War I. After the Wall Street Crash of 1929, he began his movie career in Up the River, a comedy directed by John Ford. The film also starred Spencer Tracy; Bogart played the romantic role in a part as large as Tracy's, despite Bogart's much lower billing. Bogart appeared in various supporting parts, struggling for several years, sometimes ... more on Wikipedia

Humphrey Bogart is ranked on...

Humphrey Bogart is also found on...