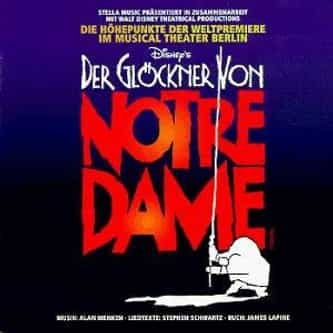 The Hunchback of Notre Dame is a musical based on the 1996 Disney film of the same name, which in turn was inspired by the 1831 Victor Hugo novel of the same name. It has music by Alan Menken, lyrics by Stephen Schwartz, and book by James Lapine. The musical premiered in 1999 in Berlin, Germany as Der Glöckner von Notre Dame. It was produced by Walt Disney Theatrical, the company's first musical to premiere outside the U.S. It ran for three years, becoming one of Berlin's ... more on Wikipedia