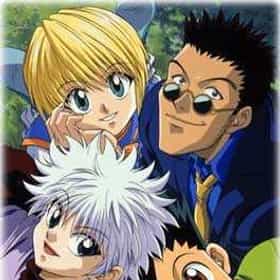 Hunter × Hunter is a 1999 television series and is part of the Hunter × Hunter media franchise. The story focuses on a young boy named Gon Freecss, who one day discovers that the father he had always been told was dead is in fact alive and well. He learns that his father, Ging, is a famous "Hunter": an individual who has proven themself an elite member of humanity. Despite the fact that Ging left his son with his relatives in order to pursue his own dreams, Gon becomes determined to follow in his father's footsteps, pass the rigorous "Hunter Examination", and eventually find his father to become a Hunter in his own right. Hunter × Hunter was ... more on Wikipedia

Hunter × Hunter is ranked on...

#10 of 891 The Best Anime Series of All Time 5.7M VOTES You love anime but what tops this list of the best anime series ever made? Top anime series include shows like Death Note, A...
#52 of 318 The Best English Dubbed Anime of All Time 969k VOTES If you're one of those people who only watches anime in Japanese, we don't blame you. English dubs can really ruin a series ...
#11 of 190 The Best Action Anime of All Time 638.5k VOTES Action anime is hard to define, but if a show has car chases and epic battles, then it probably fits the genre's descri...
#2 of 94 The Best Adventure Anime of All Time 147.4k VOTES Ready to go on an adventure? Here's our list of the best adventure anime of all time, ranked by anime fans like you. What cl...
#9 of 76 The Best Anime To Watch While Working Out 1.8k VOTES Believe it or not, there are many of us who watch anime while we exercise! For that reason, let's take a look at some great ...
#5 of 103 The Best Madhouse Anime, Ranked 70.4k VOTES   The best Studio Madhouse anime films and shows always leave viewers wanting more. They have been producing anime fo...
#871 of 1,328 The Best Guilty Pleasure TV Shows 19.5k VOTES List of the best guilty pleasure TV shows, past and present, including sitcoms, dramas, reality shows, and game shows. These...
#18 of 41 The Best Fantasy Anime on Netflix 3.7k VOTES Netflix has a nice array of fantasy anime, so let's take a look at what's currently streaming. This list features every Netf...
#2 of 125 The Best Japanese Television Drama TV Shows 560 VOTES The very best japanese television drama shows on television, ranked from best to worst. This list of the greatest japanese t...