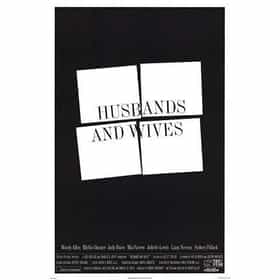 Husbands and Wives is a 1992 American comedy-drama film written and directed by Woody Allen. The film stars Allen, Mia Farrow, Sydney Pollack, Judy Davis, Juliette Lewis, and Liam Neeson. It was nominated for the Academy Award for Best Actress in a Supporting Role and Best Writing, Screenplay Written Directly for the Screen. The movie debuted around the same time as Allen and Farrow's relationship ended because of his relationship with Soon Yi Previn. The movie is filmed by Carlo Di Palma with a handheld camera style and features documentary-like one-on-one interviews with the characters interspersed with the story. Husbands and Wives was Allen's first film as sole director for a ... more on Wikipedia

lists about Husbands and Wives

The Best Meaningful Songs For A Husband's Funeral 9 votes Losing a husband is devastating and music can help you put those painful feelings into words. Funeral songs for a husband re...

Husbands and Wives is ranked on...

Husbands and Wives is also found on...