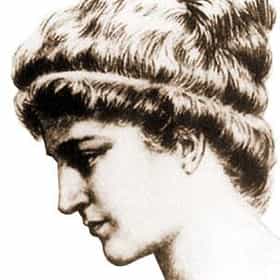 Hypatia (born c. 350–370; died 415 AD) was a Hellenistic Neoplatonist philosopher, astronomer, and mathematician, who lived in Alexandria, Egypt, then part of the Eastern Roman Empire. She was a prominent thinker of the Neoplatonic school in Alexandria where she taught philosophy and astronomy. She is the first female mathematician whose life is reasonably well recorded. Hypatia was renowned in her own lifetime as a great teacher and a wise counselor. She is known to have written a commentary on Diophantus's thirteen-volume Arithmetica, which may survive in part, having been interpolated into Diophantus's original text, and another commentary on Apollonius of Perga's treatise on conic ... more on Wikipedia

Hypatia is ranked on...

#592 of 926 People We Wish Were Still Alive 3.3M VOTES RIP to our world's greatest achievers, those who changed the way we live and the ways we thought. This list of people we wis...
#40 of 469 People who voted for Hypatia... People outside of the US are 4x more likely to vote for this Famous Role Models We'd Like to Meet In Person 538k VOTES These are the famous folks it would be most exciting to meet in person, as ranked by the wisdom of the crowd. Some of the be...
#91 of 1,472 The Greatest Minds of All Time 739.9k VOTES List of the Greatest Minds of All Time, throughout history. This list represents the most influential thinkers across variou...
People Who Were Actually Killed For Being "Witches" 151k VIEWS Most people have heard of the Salem Witch Trials and know that in many cultures people have been sentenced to deat...
20 Amazing Women in STEM Fields 10.7k VIEWS Scientists are great, no matter what gender they are, but the female scientists on this list are notable for being awesome l...

Hypatia is also found on...