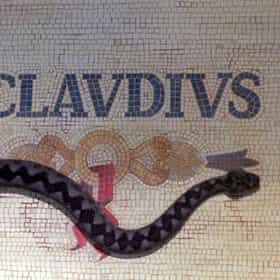 I, Claudius is a 1976 BBC Television adaptation of Robert Graves's I, Claudius and Claudius the God. Written by Jack Pulman, it starred Derek Jacobi as Claudius, with Siân Phillips, Brian Blessed, George Baker, Margaret Tyzack, John Hurt, Patricia Quinn, Ian Ogilvy, Kevin McNally, Patrick Stewart, and John Rhys-Davies. The serial sent Jacobi, Stewart, and Hurt's careers into the limelight, and it proved one of the corporation's most successful drama serials of all time. Among many other productions and adaptations, Graves's Claudius novels have also been adapted for BBC Radio 4 broadcast and for the theatre. ... more on Wikipedia

I, Claudius is ranked on...

#196 of 217 The TV Shows with the Best Writing 67.9k VOTES What are the best written TV shows of all time? The Writers Guild of America (WGA) and TV Guide recently compiled its list o...
#96 of 259 People who voted for I, Claudius... People outside of the US are 2x more likely to vote for this also upvote Spike on The Greatest TV Characters of All Time The Greatest TV Dramas of All Time 160k VOTES The greatest TV dramas of all time are the ones that make you feel connected to characters you will never meet in real life ...
#50 of 116 The Best Historical Drama TV Shows 60k VOTES Learn about real-world history while you binge watch the best historical drama shows on television. Some of the greatest TV ...
#16 of 57 The Best British History Series & Period Pieces 3.1k VOTES Thanks to having a bit of a longer history than the United States, historical TV shows from the UK include everything from r...
#12 of 106 The Best Costume Drama TV Shows 707 VOTES The very best costume drama shows on television, ranked from best to worst. This list of the greatest costume drama shows al...
#18 of 338 The Best BBC Two TV Shows 2.8k VOTES List of popular BBC Two shows, ranked from best to worst. This list of the top current and cancelled BBC Two TV series inclu...

I, Claudius is also found on...