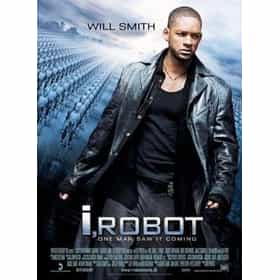 I, Robot is a 2004 American dystopian science fiction action film directed by Alex Proyas. The screenplay was written by Jeff Vintar and Akiva Goldsman, and is inspired by Isaac Asimov's short-story collection of the same name. Will Smith stars in the lead role of the film as Detective Del Spooner. The supporting cast includes Bridget Moynahan, Alan Tudyk, Bruce Greenwood, James Cromwell, Chi McBride, and Shia LaBeouf. I, Robot was released in North America on July 16, 2004, in Australia on July 22, 2004, in the United Kingdom on August 6, 2004 and in other countries between July 2004 to October 2004. Produced with a budget of USD $120 million, the film grossed $144 million ... more on Wikipedia