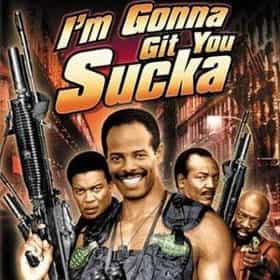 I'm Gonna Git You Sucka is a 1988 parody film of blaxploitation movies written, directed by, and starring Keenen Ivory Wayans. Featured in the film are several noteworthy African American actors who were part of the genre of blaxploitation: Jim Brown, Bernie Casey, Antonio Fargas, and Isaac Hayes. Other actors in the film are Kadeem Hardison, Ja'net Dubois, John Witherspoon, Damon Wayans, Clarence Williams III, and Chris Rock. The film's main villain, "Mr. Big", was played by the actor John Vernon. In the movie, Vernon states about on his role as "Mr. Big" that while he might seem to be "above playing an exploitation villain", many others have taken on ... more on Wikipedia

I'm Gonna Git You Sucka is ranked on...

I'm Gonna Git You Sucka is also found on...