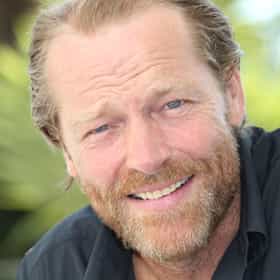 Iain Glen (born 24 June 1961) is a Scottish actor. Glen is best known for his roles as Dr. Alexander Isaacs/Tyrant in three films of the Resident Evil film series (2004–2016) and as Ser Jorah Mormont in the HBO fantasy television series Game of Thrones (2011–2019). Other notable roles include John Hanning Speke in Mountains of the Moon, Sir Richard Carlisle in Downton Abbey, the title role in Jack Taylor, and Jarrod Slade in Cleverman. He has also been cast as Bruce Wayne / Batman in the DC Universe series Titans. ... more on Wikipedia

Iain Glen is ranked on...

#15 of 53 People who voted for Iain Glen... also upvote X-Men Franchise on The Best Superhero Movies Ever Made also upvote X-Men Franchise on The Best Movies Based on Marvel Comics The Best Scottish Actors Working Today 79.8k VOTES There have been plenty of great Scottish actors throughout film history, but which male Scottish actors working today are th...
#151 of 273 The Greatest British Actors of All Time 285.2k VOTES This list of the greatest British actors of all time has been ranked by fans of the films and TV shows in which these men ha...
#5 of 12 Game of Thrones Actors Who Have Been in Romcoms 528 VOTES Ah, it’s time to leave the “t*ts and dragons” behind and enjoy a little romantic comedy brought to you by the heroes and vil...
#11 of 52 The Best Game of Thrones Actors 22.9k VOTES Perhaps it should come as no surprise that there are a slew of award-winning actors in the Game of Thrones cast. T...
#21 of 21 The Best Downton Abbey Actors 589 VOTES While you might assume that the Downton Abbey cast would be swimming in awards, surprisingly this hasn't always been the cas...
#15 of 24 How the Cast of Game of Thrones Aged from the First to Last Season 20.7k VOTES From fighting white walkers to angling for a seat on the Iron Throne, viewers have been on the edge of their seats while wat...
Cool Pics Of The 'Game Of Thrones' Cast When They Were Young 114.4k VIEWS Many of the excellent actors who make up the Game of Thrones cast have been performing and honing their craft for a very lon...
Game of Thrones Actors and What Their Real Voices Sound Like 114.4k VIEWS Ever wondered what the Game of Thrones actors' real speaking voices sound like? The HBO series is one of television's greate...

Iain Glen is also found on...