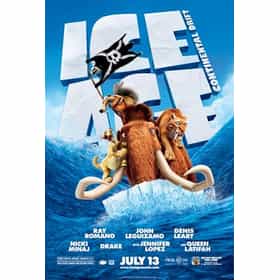 Ice Age: Continental Drift is a 2012 American 3D computer-animated comedy adventure film directed by Steve Martino and Mike Thurmeier. It was written by Jason Fuchs and Michael Berg, and features the voices of Ray Romano, John Leguizamo, Denis Leary, Nicki Minaj, Drake, with Jennifer Lopez, and Queen Latifah. It is the fourth installment of the Ice Age series, produced by Blue Sky Studios and distributed by 20th Century Fox. It is the first sequel in the series not directed by Carlos Saldanha, and the second Ice Age installment that utilises Digital 3D. It was released in the US on July 13, 2012, three years after its predecessor Dawn of the Dinosaurs. This was the first Ice Age film ... more on Wikipedia