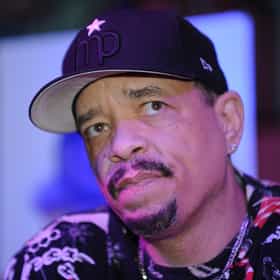 Tracy Lauren Marrow (born February 16, 1958), better known by his stage name Ice-T, is an American musician, rapper, songwriter, actor, record producer, and author. He began his career as an underground rapper in the 1980s and was signed to Sire Records in 1987, when he released his debut album Rhyme Pays; the second hip-hop album to carry an explicit content sticker after Slick Rick's La Di Da Di. The following year, he founded the record label Rhyme $yndicate Records (named after his collective of fellow hip-hop artists called the "Rhyme $yndicate") and released another album, Power, which went on to go Platinum. He also released several other albums that went Gold. He ... more on Wikipedia

The Best Ice T Movies 1k votes List of the best Ice T movies, ranked best to worst with movie trailers when available. Ice T's highest grossing movies have...
The Best Ice T Songs 277 votes List of the best Ice T songs, ranked by fans like you. This list includes every Ice T single, but true fans know there are o...
The Best Ice T Albums of All Time 101 votes Ice T is widely considered one of the greatest West Coast rappers, one of the best gangsta rappers and one of the best rappe...
Ice-T Doesn't Think It's Weird That He Released A Song Called 'Cop Killer' And Plays A Cop On TV 1.2k views Ice-T has been on both sides of the law, playing a detective on Law & Order and releasing a song in 1992 titled "Co...