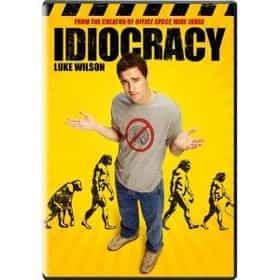 Idiocracy is a 2006 American satirical science fiction comedy film directed by Mike Judge and starring Luke Wilson, Maya Rudolph, Dax Shepard, and Terry Crews. The film tells the story of two people who take part in a top-secret military hibernation experiment, only to awaken 500 years later in a dystopian society where advertising, commercialism, and cultural anti-intellectualism have run rampant and that is devoid of intellectual curiosity, social responsibility, and coherent notions of justice and human rights. The film was not screened for critics, and 20th Century Fox was accused of "abandoning" the film. Dan Mitchell of The New York Times argued that Fox might have ... more on Wikipedia

17 Ways Idiocracy Has Actually Come True 330k views Though it was a box office bomb when first released in 2006, Idiocracy gave viewers a vision of the future that has come tru...
21 Interesting Facts You May Not Know About Mike Judge 472 votes Mike Judge has spent more than 30 years entertaining audiences with his films and TV shows. Between the crude weirdness of...

Idiocracy is ranked on...

Idiocracy is also found on...