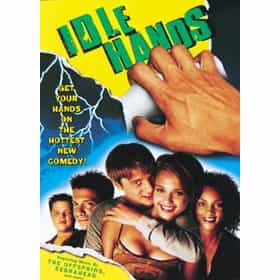 Idle Hands is a 1999 horror comedy film directed by Rodman Flender, written by Terri Hughes and Ron Milbauer, and starring Devon Sawa, Seth Green, Elden Henson, Jessica Alba, and Vivica A. Fox. The main plot follows the life of an average lazy stoner teenager, Anton Tobias, whose hand becomes possessed, even after being cut off from his arm. The film's name is based on the saying "idle hands are the Devil's play-things" or "idle hands do the Devil's work". ... more on Wikipedia

Idle Hands is ranked on...

#878 of 1,199 The Absolute Funniest Movies Of All Time 1M VOTES Looking for good comedy movies to watch? Here are the funniest movies of all time, ranked by fans. What are the top comedies...
#148 of 493 The Funniest '90s Movies 305.6k VOTES List of the funniest 90s movies. The best comedies of the 1990s make up the titles on this ranking page. Nineties nostalgia ...
#4 of 23 Underrated Halloween Movies You Should Watch This Year 86.1k VOTES Isn’t Halloween the best? Not only do you get to dress up and eat candy, but you don't look weird for watching spooky movies...
#20 of 35 The Greatest Band Cameos In Movie History 2.1k VOTES What are the greatest band cameos in movie history? Making a comprehensive list of all musicians who've graced the big scree...
#27 of 182 The Best Comedy Horror Movies, Ranked 31.4k VOTES Funny horror movies! This is a list list of some of the best comedy horror movies ever made, or horror comedies. Either way ...
#37 of 58 The Best Teen Movies of the 1990s 38.7k VOTES The 1990s saw many classic, cult film hits that have remained popular even with modern audiences. What is the best 1990s tee...
#18 of 100 The Funniest Horror Movies Ever Made 52.2k VOTES There’s nothing better than a ridiculous comedy horror movie. Whether it’s for a date night or just a timekiller, the funnie...
#74 of 95 The Best Teen Comedy Movies, Ranked 26.9k VOTES This list contains information on the best teen comedy movies, ranked from best to worst by user votes. The best teen comedy...
#97 of 197 The Best R-Rated Comedies 11.1k VOTES List of R-Rated comedies, ranked from best to worst with movie trailers when available. These comedies are all R-Rated, so i...
#10 of 41 The Best Seth Green Movies 603 VOTES List of the best Seth Green movies, ranked best to worst with movie trailers when available. Seth Green's highest grossing m...
Premiere's Hollywood's Evergreen Halloween Movies 7.7k VIEWS Premiere's list of the top Halloween movies. These are classic Halloween movies that need to be watched. For the full articl...

Idle Hands is also found on...