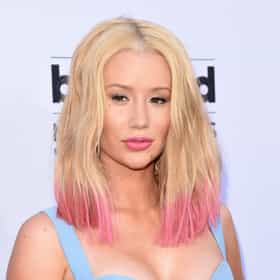 Amethyst Amelia Kelly, known professionally as Iggy Azalea (born 7 June 1990), is an Australian rapper. Born in Sydney and raised in Mullumbimby, she moved to the United States at the age of sixteen to pursue a career in hip-hop music, residing in the southern part of the country. Her stage name, from the masculine Egnatius, comes from the name of her dog and the street she lived on. She earned public recognition after releasing music videos for her songs "Pu$$y" and "Two Times" on YouTube. She signed a recording contract with Grand Hustle Records in 2012; which is owned by American rapper T.I., after gaining attention from her first full-length project, a mixtape ... more on Wikipedia

The Best Songs Feat. Iggy Azalea 322 votes These are the best songs featuring Iggy Azalea. As a solo artist, Iggy Azalea has won awards (American Music Award for Favor...
Iggy Azalea Loves And Hookups 35.9k views Who is Iggy Azalea dating? Many famous men have dated Iggy Azalea, and this list will give you more details about these luck...

Iggy Azalea is ranked on...

Iggy Azalea is also found on...