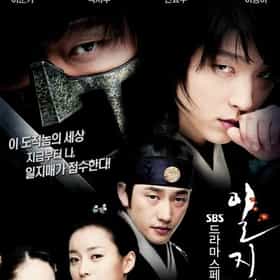 Iljimae is a 2008 South Korean period-action television series, starring Lee Joon-gi in the title role of Iljimae, Han Hyo-joo, Lee Young-ah and Park Si-hoo. It is loosely based on the comic strip Iljimae, published between 1975 and 1977, written by Ko Woo-young based on Chinese folklore from the Ming dynasty about a masked Robin Hood-esque character during the Joseon era. It was directed by Lee Yong-suk, and produced by Chorokbaem Media. It aired on SBS from May 21 to July 24, 2008 on Wednesdays and Thursdays at 21:55 for 20 episodes. ... more on Wikipedia

Iljimae is ranked on...

#130 of 205 The Best Korean Dramas of All Time 847.5k VOTES As seen in the new and latest Korean dramas, there are always things to expect from K-dramas: The boy that you lov...
#16 of 93 The Best SBS TV Shows 30.8k VOTES List of popular SBS shows, ranked from best to worst. This list of the top current and cancelled SBS TV series includes the ...