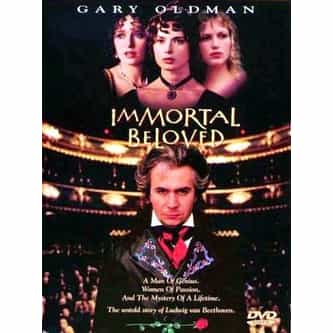 Tagline
The genius behind the music. The madness behind the man. The untold love story of Ludwig van Beethoven.

Immortal Beloved is a 1994 film about the life of composer Ludwig van Beethoven. The story follows Beethoven's secretary and first biographer Anton Schindler as he attempts to ascertain the true identity of the Unsterbliche Geliebte addressed in three letters found in the late composer's private papers. Schindler journeys throughout the Austrian Empire interviewing women who might be potential candidates as well as through Beethoven's own tumultuous life. ... more on Wikipedia

Immortal Beloved IS LISTED ON