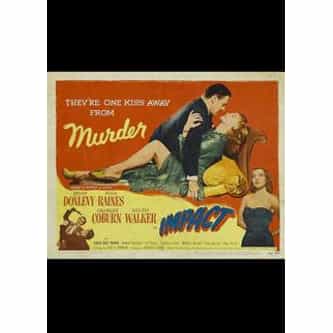 Impact is a 1949 film noir drama directed by Arthur Lubin and starring Brian Donlevy and Ella Raines. It was filmed entirely in California and included scenes filmed at San Francisco's Fisherman's Wharf and other locations around the city. The film was based on a story by film noir writer Jay Dratler. The supporting cast features Charles Coburn, Helen Walker, Anna May Wong, Philip Ahn and William Wright. ... more on Wikipedia

Impact IS LISTED ON