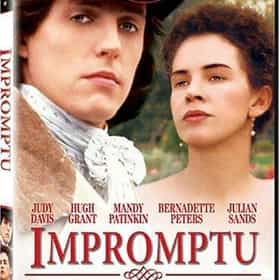 Impromptu is a 1991 British-American period drama film directed by James Lapine, written by Sarah Kernochan, produced by Daniel A. Sherkow and Stuart Oken, and starring Hugh Grant as Frédéric Chopin and Judy Davis as George Sand. The film was shot entirely on location in France as a British production by an American company. The main location used was at the Chateau des Briottières outside of Angers, in the Loire Valley. The film was rated PG-13 by the MPAA. ... more on Wikipedia

Impromptu is ranked on...

Impromptu is also found on...