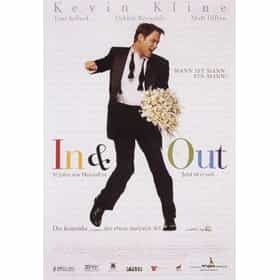 In & Out is a 1997 American romantic comedy film directed by Frank Oz and starring Kevin Kline, Tom Selleck, Joan Cusack, Matt Dillon, Debbie Reynolds, and Wilford Brimley. It is an original story by screenwriter Paul Rudnick. Joan Cusack was nominated for an Academy Award for Best Supporting Actress for her performance. The film was inspired by Tom Hanks's tearful speech when he accepted his 1994 Oscar, in which he mentioned his high-school drama coach Rawley Farnsworth, and his former classmate John Gilkerson, "two of the finest gay Americans, two wonderful men that I had the good fortune to be associated with," which mistakenly outed Farnsworth. The film became one of ... more on Wikipedia