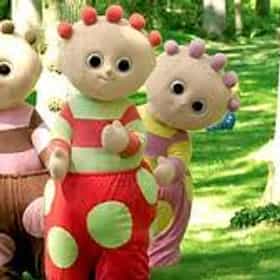 In the Night Garden

In the Night Garden is a BBC children's television series, aimed at children aged from 1 to 6 years old. It is produced by Ragdoll Productions. Andrew Davenport created, wrote, and composed the title theme and incidental music for all 100 episodes. It was produced by Davenport and Anne Wood, the team that also co-created Teletubbies. The programme is narrated by Derek Jacobi. It is filmed mostly in live action, and features a mix of actors in costume, puppetry and computer animation. The characters include Iggle Piggle, Makka Pakka, Upsy Daisy, the Tombliboos, the Pontipines / the Wottingers, the Haahoos, the Ninky Nonk and the Pinky Ponk. The series was announced in October 2006, and ... more on Wikipedia

In the Night Garden is ranked on...

In the Night Garden is also found on...