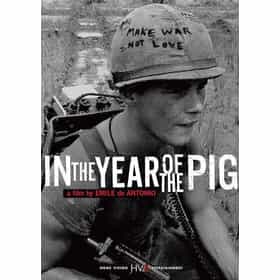 In the Year of the Pig

In the Year of the Pig is a 1968 American documentary film about the origins of the Vietnam War, directed by Emile de Antonio. It was nominated for an Academy award for best documentary. The film, which is in black and white, contains much historical footage and many interviews. Those interviewed include Harry Ashmore, Daniel Berrigan, Philippe Devillers, David Halberstam, Roger Hilsman, Jean Lacouture, Kenneth P. Landon, Thruston B. Morton, Paul Mus, Charlton Osburn, Harrison Salisbury, Ilya Todd, John Toller, David K. Tuck, David Werfel and John White. Produced during the Vietnam War, the film was greeted with hostility by many audiences, with bomb threats and vandalism directed at ... more on Wikipedia

In the Year of the Pig is ranked on...

#287 of 318 The Best Political Films Ever Made 24.6k VOTES Political movies can approach the notion of politics and government from numerous perspectives, and with many wildly diverge...
#11 of 51 The Best Documentaries About Vietnam 3.3k VOTES There have been many documentaries about the Vietnam War and the plethora of controversies that surrounded it. What are the ...

In the Year of the Pig is also found on...