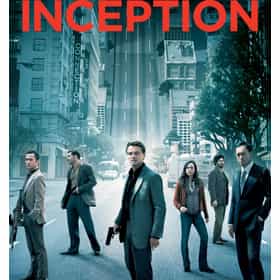 Inception is a 2010 science fiction thriller film written, produced, and directed by Christopher Nolan. The film stars a large ensemble cast that includes Leonardo DiCaprio, Ellen Page, Joseph Gordon-Levitt, Marion Cotillard, Ken Watanabe, Tom Hardy, Dileep Rao, Cillian Murphy, Tom Berenger, and Michael Caine. DiCaprio plays a professional conman who commits corporate espionage by infiltrating the subconscious of his targets. He is offered a chance of redemption as payment for a task considered to be impossible: "inception", the implantation of another person's idea into a target's subconscious. ... more on Wikipedia

List of Movies Like Inception 4.8k votes Looking for a list of movies that are similar to Inception? You're in luck, because all of the films listed below are re...
Inception Movie Quotes 889 votes Best Inception quotes, ranked by fans. This list of great movie quotes from Inception collects all of the most famous lines ...
What to Watch If You Love Inception 376 votes Few will argue that Inception is one of the greatest sci-fi films in recent years. It’s a mind-bending, mind-altering trip o...

Inception is ranked on...

Inception is also found on...