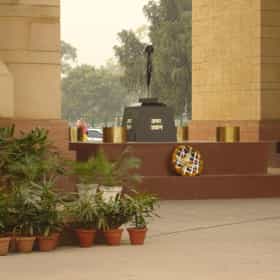 The India Gate, originally called the All India War Memorial, is a war memorial located astride the Rajpath, on the eastern edge of the ‘ceremonial axis’ of New Delhi, formerly called Kingsway. India gate is a memorial to 82,000 soldiers of the undivided British Indian Army who died in the period 1914–21 in the First World War, in France, Flanders, Mesopotamia, Persia, East Africa, Gallipoli and elsewhere in the Near and the Far East, and the Third Anglo-Afghan War. 13,300 servicemen's names, including some soldiers and officers from the United Kingdom, are inscribed on the gate. The India Gate, even though a war memorial, evokes the architectural style of the triumphal arch like the ... more on Wikipedia

India Gate is ranked on...

The Most Important Gates in History 11.7k VIEWS Throughout history, when people wanted to show off, they tended to build something really, really impressive. Sometimes they...

India Gate is also found on...