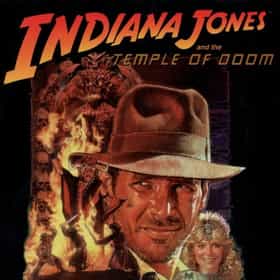 Indiana Jones and the Temple of Doom

Indiana Jones and the Temple of Doom is a 1984 American adventure film directed by Steven Spielberg, and the second installment in the Indiana Jones franchise and a prequel to the 1981 film Raiders of the Lost Ark. In 1935, Indiana Jones (Harrison Ford) arrives in India, still part of the British Empire, and is asked to find a mystical stone, where he then stumbles upon a secret cult committing enslavement and human sacrifices in the catacombs of an ancient palace. ... more on Wikipedia

lists about Indiana Jones and the Temple of Doom

Indiana Jones and the Temple of Doom is ranked on...

#17 of 571 The Greatest Movies Of The 1980s, Ranked 524.7k VOTES Since it was one of the greatest decades for film, here's a list of the best movies of the 80s. These are the most popu...
#51 of 624 The Greatest Guilty Pleasure Movies 207.9k VOTES What makes a film a guilty pleasure? This is a movie that you love to watch, but won't display on your DVD shelf... or maybe...
#77 of 186 The Best Movies for Tweens 103.8k VOTES Raising a tweenager can be a handful. It's a very awkward age all around and they can be hard to find good, family-friendly ...
#12 of 181 The Best Movie Sequels Ever Made 120.3k VOTES What are the best movie sequels ever made? This list includes several of the greatest movies of all time, and they all have ...
#15 of 35 35 Movies That Were Ridiculously Banned Around the World 8.7k VOTES The history of film is littered with movies that were banned for explicit scenes of excessive violence or gratuitous sex. Bu...
#112 of 165 Live Action Films with the Best CGI Effects 24.4k VOTES Live action films with the best CGI effects include some of the most popular movies of all-time. Think Jurassic Park, the Tr...
#44 of 47 What to Watch If You Love 'Gotham' 153 VOTES Gotham is a superhero-esque crime series centered around the future Commissioner James Gordon, Batman's confidant in the Got...
#4 of 36 The Best Movies Released Memorial Day Weekend 5k VOTES This list includes the best movies released over Memorial Day weekend. The traditional, four-day Memorial Day weekend is con...
#12 of 98 The Best Action Movies of the 1980s 70.3k VOTES A list of the best '80s action movies arguably represents a list of the greatest action movies of all time. The Terminator, ...
#14 of 77 The Best Fantasy Movies of the 1980s 1.1M VOTES "My name is Inigo Montoya. You killed my father. Prepare to die." That's only one of the many memorable quotes tha...
13 Shows And Movies Joss Whedon Has Savagely Ripped Apart 169.7k VIEWS Joss Whedon is a busy man. When he’s not directing blockbuster action movies, he's writing emotionally powerful, frequently ...
#50 of 234 The Best PG Action/Adventure Movies 3.5k VOTES List of PG action/adventure movies, ranked from best to worst with movie trailers when available. This list takes the best P...
#9 of 29 The Best 80s Movies On Netflix, Ranked 2.2k VOTES Here are the best 80s movies streaming now on Netflix. Whether you're looking for Hollywood classics, campy movies, or Oscar...
What Was The Biggest Movie The Year You Were Born? 136.3k VIEWS What was the biggest movie the year you were born? You might be surprised to learn that many of the highest grossing mo...
#6 of 21 The Best George Lucas Movies 2.3k VOTES A list of the best George Lucas movies, ranked from best to worst. George Lucas's highest grossing movies have received a lo...
The Top Grossing Movies of All Time (Adjusted for Inflation) 18.3k VIEWS The top grossing movies of all time, adjusted for inflation, as reported by highest grossing movies ever includes a calculat...
#18 of 39 The Best Adventure Shows & Movies, Ranked 334 VOTES Of all the genres available on television and film, only one truly introduced the world to the concept of a blockbuster! Adv...
#19 of 51 The Most Memorable Dinner Scenes, Ranked 154 VOTES Eating dinner might not seem like the most exciting activity to depict onscreen, but the best dinner scenes in movies prove ...
#3 of 5 The Best Movies (and Series) in the Indiana Jones Franchise, Ranked 101 VOTES There is no doubt that all the Indiana Jones movies are classics or at least memorable but one of them has to be the best of...

Indiana Jones and the Temple of Doom is also found on...

Every Oscar Winning Film Ever Films Scored By John Williams