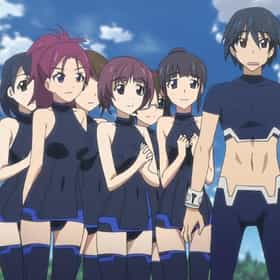 Infinite Stratosis a Japanese light novel series by Izuru Yumizuru with illustrations provided by Okiura and CHOCO. A 12-episode anime adaptation aired in Japan between January and March, 2011, and an original video animation episode was released on December 7, 2011. In the near future, a Japanese scientist creates a powerful high-tech exoskeleton called "Infinite Stratos". Possessing technology and combat capabilities far surpassing that of any other arms system, the IS threatens to destabilize the world. ... more on Wikipedia

Infinite Stratos is ranked on...

#188 of 891 The Best Anime Series of All Time 5.7M VOTES You love anime but what tops this list of the best anime series ever made? Top anime series include shows like Death Note, A...
#65 of 121 The 100+ Best Anime Streaming On Hulu 191.8k VOTES Here is the list of the best anime streaming on Hulu, as determined by anime fans like you. Hulu has quite an expansive coll...
#13 of 41 The 24+ Best Ecchi Comedy Anime of All Time 46.7k VOTES What is the funniest ecchi anime of all time? We're letting the crowd decide with this ranked list of the best ecchi comedy ...
#31 of 74 The Best Fan Service Anime of All-Time 147.9k VOTES If you've landed on this list of the best fan service anime, then we probably don't have to tell you what the definition of ...
#11 of 38 The 25+ Best Ecchi Action Anime Ever Made 49.1k VOTES Since ecchi has so many sub genres, we present you with the best ecchi action anime of all time, ranked by fans like you. Wh...
#10 of 32 The Best Anime Like Strike The Blood 1.1k VOTES When Kojou Akatsuki finds out that he is one of the most powerful vampires alive, his entire life changes. Despite...
#10 of 79 The Best Harem Manga of All Time 17.4k VOTES If there's one type of character you should be jealous of, it's the main character of a harem manga. He's surrounded by beau...
#1 of 26 The 25+ Best Anime About All Girls Schools 2.3k VOTES It turns out there are some great anime set in all girls schools, but which are really worth your time? This list ranks...
#7 of 30 The Best Anime Like Campione! 873 VOTES Need some Campione anime recommendations? Since it's such a unique series, let's rank the best anime like Cam...
#9 of 102 The Best Harem Anime Of All Time 406.1k VOTES List of the best Harem anime, voted on by Ranker's anime community. If you're not familiar with the harem genre, it usually ...
#3 of 26 The Best Anime Like Maken-Ki! 580 VOTES Looking for some Maken-Ki! anime recommendations? Since it's such a fun series, let's rank the best anime lik...
#12 of 31 The Best Anime Like Chivalry Of A Failed Knight 3k VOTES Need some Chivalry Of A Failed Knight anime recommendations? Since it's an extremely popular series, let's rank th...
#9 of 19 The Best Anime Like Demon King Daimao 1.5k VOTES Also known as Demon King Daimao, the TV anime Ichiban Ushiro No Daimaou adapts the first five volumes of the light nove...
#2 of 40 The Best Science Fiction Anime on Hulu 784 VOTES If you have a Hulu subscription and love sci-fi anime, then you're in luck! Hulu has a wide variety of good science fiction ...
#15 of 18 The Best Tournament Anime on Hulu 106 VOTES What are the best tournament anime currently streaming on Hulu? If you love anime about deadly tournaments, you'll be happy ...