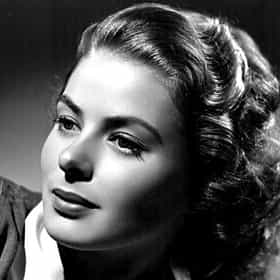 Ingrid Bergman (29 August 1915 – 29 August 1982) was a Swedish actress who starred in a variety of European and American films, television movies and plays. She won many accolades, including three Academy Awards, two Primetime Emmy Awards, a Tony Award, four Golden Globe Awards, and a BAFTA Award. She is best remembered for her roles as Ilsa Lund in Casablanca (1942) and Alicia Huberman in Notorious (1946). Bergman was born in Stockholm to a Swedish father and a German mother, and started her acting career in Swedish and German films. Her introduction to Americans came in the English-language remake of Intermezzo (1939). Apart from Casablanca opposite Humprey Bogart, her notable ... more on Wikipedia

Ingrid Bergman is ranked on...

Ingrid Bergman is also found on...