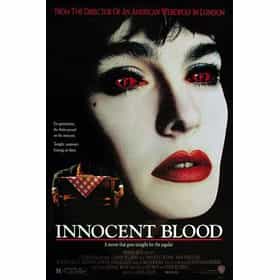 Innocent Blood is a 1992 American horror film directed by John Landis. The film stars Anne Parillaud as a beautiful French vampire who finds herself pitted against a gang of vicious men led by Robert Loggia who eventually becomes a vampire himself. The film is set and was filmed in and around the Pittsburgh, Pennsylvania area. The "Little Italy" of Pittsburgh, a portion of the Bloomfield, Pittsburgh neighborhood, clustered around Liberty Avenue, is recognizable in many of the film's outdoor urban scenes. ... more on Wikipedia

Innocent Blood is ranked on...

Innocent Blood is also found on...