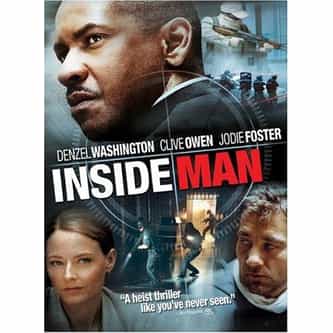 Tagline
It looked like the perfect bank robbery. But you can't judge a crime by its cover.

Inside Man is a 2006 American thriller film directed by Spike Lee, and written by Russell Gewirtz. The film centers on an elaborate bank on Wall Street over a 24-hour period. It stars Denzel Washington as Detective Keith Frazier, the NYPD's hostage negotiator; Clive Owen as Dalton Russell, the mastermind who orchestrates the event; and Jodie Foster as Madeleine White, a Manhattan power broker who becomes involved at the request of the bank's founder, Arthur Case, to keep something in his ... more on Wikipedia

Inside Man IS LISTED ON