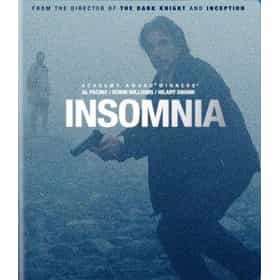 Insomnia is a 2002 American thriller film directed by Christopher Nolan, and starring Al Pacino, Robin Williams and Hilary Swank. It tells the story of two Los Angeles homicide detectives investigating in an Alaskan town. A remake of the 1997 Norwegian film of the same name, Insomnia was released on May 24, 2002, to critical acclaim and commercial success, grossing $113 million worldwide. To date, this is the only film that Christopher Nolan has directed without receiving at least a share of one of the writing credits, even though he wrote the final draft of the script. ... more on Wikipedia

Insomnia is ranked on...

Insomnia is also found on...