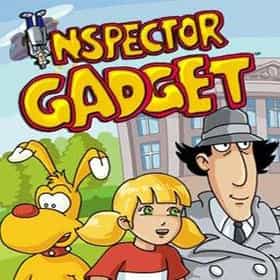 Inspector Gadget is a French-Canadian–American animated television series that revolves around the adventures of a clumsy, dim-witted cyborg detective named lnspector Gadget—a human being with various bionic gadgets built into his body. Gadget's nemesis is Dr. Claw, the leader of an evil organization known as "M.A.D." This is the first syndicated cartoon show from DIC Entertainment. lt originally ran from 1983 to 1986 and remained in syndication into the late 1990s. It continues to air successfully in reruns around the world. The series was produced by companies in France, Canada, the United States, Taiwan, and Japan. It was a co-production between DIC Entertainment in France ... more on Wikipedia

All Of Inspector Gadget's Gadgets, Ranked By Ludicrousness 2.9k votes In one of the earliest Inspector Gadget episodes, entitled "Ghost Catchers," the book from Penny’s computer class ...
Every Time Chief Quimby Was Injured By His Own Self Destructing Message, Ranked 290 votes If you’re an Inspector Gadget fan, then you know the show only begins once a mysterious (and often angry) police chief shows...

Inspector Gadget is ranked on...

Inspector Gadget is also found on...