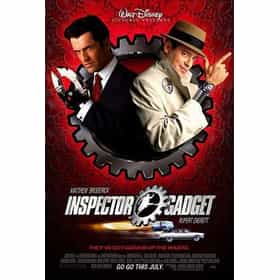 Inspector Gadget is a 1999 live-action action-comedy film loosely based on the 1983 animated cartoon series of the same name. It starred Matthew Broderick as the title character, along with Rupert Everett as Dr. Claw, Michelle Trachtenberg as Penny, and Dabney Coleman as Chief Quimby. Two new characters were introduced, Brenda Bradford and the Gadgetmobile. The film tells the story of how Inspector Gadget and Dr. Claw came to be in the cartoon. The film was produced by Caravan Pictures and DIC Entertainment and distributed by Walt Disney Pictures. It was filmed in Pittsburgh, Pennsylvania, Baton Rouge, Louisiana, and Los Angeles, California, with the ice castle-like main tower of ... more on Wikipedia

Inspector Gadget is ranked on...

Inspector Gadget is also found on...