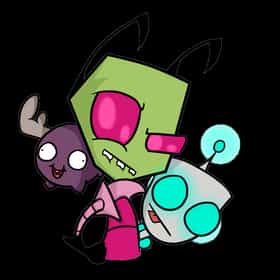 Invader Zim is an American animated television series created by Jhonen Vasquez for Nickelodeon. The series centers on an extraterrestrial named Zim from the planet Irk, and his mission to conquer Earth and enslave the human race along with his malfunctioning robot servant GIR. He is antagonized by Dib, a young paranormal investigator who is determined to stop Zim. Vasquez pitched the series to Nickelodeon, who desired a series for their older demographic. This led to it being greenlit and premiering on March 30, 2001. As the series went on, ratings declined and budgetary issues became more frequent. Before the second season was completed, Nickelodeon cancelled the series, leaving ... more on Wikipedia

Invader Zim Fan Theories 2.7k votes Since Invader Zim is a crazy show, it stands to reason that there are some crazy theories about Zim and all the Irkens. Inva...
The Strangest Jokes from Invader Zim, a Cartoon Ahead of Its Time 2.8k votes Although it didn't last very long, Nickelodeon's cult classic animated hit Invader Zim carved out a nice following for itsel...
The Best Invader Zim Characters 517 votes Invader Zim is not a series known for its huge range of characters, but let's rank them anyway! This list ranks every Invade...

Invader Zim is ranked on...

#78 of 717 People who voted for Invader Zim... People under 30 are 2x more likely to vote for this People in the Central US are 2x more likely to vote for this The Best Cartoons of All Time 3M VOTES There have been many fantastic animated TV shows throughout the history, but which ones are the best? Some people think that...
#201 of 385 The Best Kids Cartoons of All Time 1.2M VOTES This list contains information about the best kids cartoons, ranked by your votes. Over the years, there have been tons of g...
#83 of 477 The Greatest Animated Series Ever Made 642.2k VOTES The top animated series of all time include some of the best TV shows ever to flicker in your living room (or on your comput...
#18 of 51 People who voted for Invader Zim... also upvote Star Wars Franchise on The Best Movies of All Time The Best Nickelodeon Cartoons of All Time 340.7k VOTES Nickelodeon cartoons are some of the best on cable and have made Nickelodeon the go-to source of basic cable children's ente...
#48 of 52 Which Nerd Favorite Has The Most Annoying Fans? 33k VOTES When it comes to their favorite franchises, geeks mean business. The shows, films, comics, and video games on this list ins...
#35 of 196 People who voted for Invader Zim... People under 30 are 2x more likely to vote for this The Best Adult Cartoon Shows in TV History 478.9k VOTES This is a list of the best adult cartoons that ever aired, ranked by your votes. In the 1990s, cartoons with R-rated humor b...
#121 of 236 The Greatest Cartoon Theme Songs of All Time 163.8k VOTES For entire generations of kids, some of their most fond memories are of watching Saturday morning cartoons. The animated sho...
#28 of 238 The Best Cartoons to Watch Stoned 64.7k VOTES Do you often wonder, “what are the best shows to watch high?” Or, more specifically, “what are the best cartoons to watch hi...
#21 of 45 The Most Crude and Classic '90s Adult Cartoons 24.2k VOTES Do you like crude jokes and quirky characters? Who doesn't?! This list of the best 90s adult cartoons contains all your favo...
#7 of 15 Rick And Morty Is On Hiatus Once Again: Here Are 15 Series To Watch In The Meantime 9.6k VOTES Fans of Rick and Morty have found themselves in an unenviable position: the series is on hiatus, and there won't be any...
#33 of 44 The Best Children's Cartoons with Adult Humor 13.5k VOTES The absolute best children’s cartoons with adult humor, ranked from the most popular to the least based by the Ranker commun...
#4 of 14 14 Masterpiece Cartoons That Never Got the Recognition They Deserved 12.3k VOTES Hundreds of cartoons have blared over childhood TV sets and filled the hours of entertainment-seeking adults. And while ther...
#7 of 12 12 Super Creepy Animated Shows And Movies Technically For Kids 6.4k VOTES Ask yourself this: should children be coddled, or treated like miniature adults? Should they be insulated from the horrifyin...
#636 of 1,328 The Best Guilty Pleasure TV Shows 19.7k VOTES List of the best guilty pleasure TV shows, past and present, including sitcoms, dramas, reality shows, and game shows. These...
#23 of 45 What to Watch If You Love 'Bob's Burgers' 237 VOTES Bob's Burgers is a hilarious animated series about a family who runs a burger shop that garnered the love and affection of h...
#99 of 134 The Best Cartoon Network TV Shows 495.3k VOTES Cartoon Network shows have been bringing some of the funniest and most action-packed cartoons that both kids and adults can ...
#19 of 28 The Best Supernatural Comedy Series 743 VOTES Many comedies on TV draw humor from relatable, everyday situations. However, there are shows that find the humor in the supe...
#27 of 46 The Best 2010s Nickelodeon Shows 28.3k VOTES These are the best 2010s Nickelodeon shows, ranked from best to worst by user votes. Some top 2010s Nickelodeon shows were N...
Nostalgic Cartoons You Never Realized Were Actually Super Progressive 10.9k VIEWS Cartoons aren't generally considered hotbeds of political commentary or epicenters of social change, but in realit...
#7 of 42 The Best Sci-Fi Kids Shows Ever Made 507 VOTES Many kids dread going to science class at school. Plenty of us had teachers who were content with lecturing instead of letti...
#24 of 62 The Best Animated Comedy Series Ever 5.6k VOTES You expect cartoons to be funny. The funniest animated television shows take that expectation a littler further. The best an...
#27 of 86 The Best Satire TV Shows 9.8k VOTES The very best satire shows on television, ranked from best to worst. This list of the greatest satire shows also includes pi...

Invader Zim is also found on...