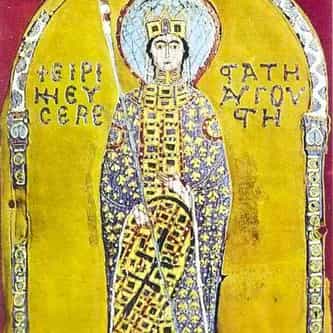 Irene of Athens (c. 752 – 9 August 803 AD), also known as Irene Sarantapechaina, was Byzantine empress consort by marriage to Leo IV from 775 to 780, regent during the minority of her son Constantine VI from 780 until 790, co-regent from 792 until 797, and finally sole ruler and first empress regnant of the Byzantine Empire from 797 to 802. A member of the politically prominent Sarantapechos family, she was selected as Leo IV's bride for unknown reasons in 768. Even though her husband was ... more on Wikipedia

Irene of Athens IS LISTED ON