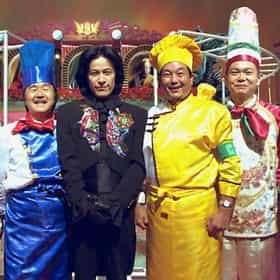 Iron Chef is a Japanese television cooking show produced by Fuji Television. The series, which premiered on October 10, 1993, is a stylized cook-off featuring guest chefs challenging one of the show's resident "Iron Chefs" in a timed cooking battle built around a specific theme ingredient. The series ended on September 24, 1999, although occasional specials were produced until 2002. The series aired 309 episodes. Repeats are regularly aired on the Food Network in Canada, the Cooking Channel in the United States and on Special Broadcasting Service in Australia. Fuji TV aired a new version of the show, titled Iron Chef, starting on October 26, 2012. ... more on Wikipedia

Iron Chef is ranked on...

#282 of 383 People who voted for Iron Chef... also upvote James Bond Franchise on Every James Bond Movie, Ranked Best to Worst also upvote The Pianist on The Best Movies of All Time The Best TV Shows of The Last 20 Years 1.5M VOTES This best TV show list represents the combined opinions of thousands of TV fans. Anyone can vote on this list of the best TV...
#48 of 133 The Best Reality Competition Series 75.8k VOTES The best reality TV competition series, ranked by fans and critics. Reality shows are among the most-watched programs on TV,...
#10 of 30 What to Watch If You Love 'MasterChef' 119 VOTES MasterChef kept viewers on the edge of their seats as home chefs compete for a $250,000 prize, so it's no surprise that you’...
#10 of 25 The Best 1990s Reality Shows 2.2k VOTES These are the best 1990s reality shows ranked from best to worst by user votes. There were some great 90s reality programs t...
#10 of 138 The Best Food Network TV Shows 12.1k VOTES List of popular Food Network shows, ranked from best to worst. This list of the top current and cancelled Food Network TV se...
#12 of 50 The Most Exciting Reality Competition Shows Ever Made 451 VOTES The best reality competition TV shows ever aired are some of the most exciting and competitive series to watch on telev...