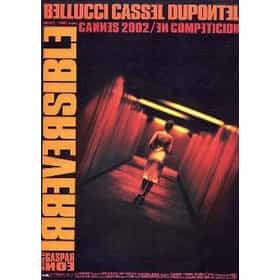 Irréversible is a 2002 French mystery thriller film written and directed by Gaspar Noé, starring Monica Bellucci, Vincent Cassel and Albert Dupontel. The film employs a non-linear narrative and follows two men as they try to avenge a girlfriend. The soundtrack was composed by the electronic musician Thomas Bangalter, who is best known as half of the duo Daft Punk. Irréversible competed at the 2002 Cannes Film Festival and won the Stockholm International Film Festival's award for best film. ... more on Wikipedia

Irréversible is ranked on...

#92 of 156 The Most Confusing Movies Ever Made 66.7k VOTES The most confusing movies ever made are those films which either intentionally or accidentally are hard to follow, complic...
#23 of 43 Great Movies with a Neon Aesthetic 2.7k VOTES Bright colors, vivid lights, and a modern aesthetic come together to create cinematic beauty in the best neon films. The t...
#23 of 117 The Most Nausea-Inducing Great Films 40.2k VOTES The most nausea-inducing great films manage to make moviegoers squirm with discomfort, but leave the theater feeling like th...
#7 of 14 The Most Horrifying Non-Horror Movies Ever Made 107.7k VOTES No doubt, any great horror film will make the spectator scream in terror, white-knuckle their armrest, and feel like they’re...
#6 of 14 Horror Movies Nobody Who Is Squeamish Can Finish, Ranked 628 VOTES Whether it's gross-out horror, extreme slashers, or just horror movies that are downright disturbing, not every movie i...
#44 of 47 35+ Great Movies That Blur the Lines Between Horror and Drama 2.4k VOTES Some of the creepiest movies of all time blur the line between horror and drama through disturbing storylines. The top drama...
#57 of 57 The Best Cerebral Crime Movies, Ranked 1.3k VOTES This list contains information on the best cerebral crime movies, ranked from best to worst by user votes. The best cerebral...
#5 of 43 The Best Monica Bellucci Movies 5.1k VOTES This list of the best Monica Bellucci movies is ranked best to worst, and includes movie trailers when available.  Moni...
#50 of 50 The Best Thriller Movies of 2002 297 VOTES List of the best 2002 thriller movies, ranked by how many upvotes they've received by other fans of the genre. These thrille...
#3 of 31 The Best Vincent Cassel Movies 324 VOTES List of the best Vincent Cassel movies, ranked best to worst with movie trailers when available. Vincent Cassel's highest gr...

Irréversible is also found on...