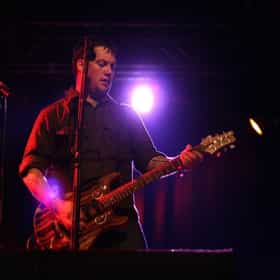 Isaac Kristofer Brock (born July 9, 1975) is the lead singer, guitarist, banjoist, and songwriter for the American indie rock band Modest Mouse, as well as his side project band, Ugly Casanova. As a songwriter he is noted for wordplay and frequent use of metaphors, philosophical lyrics, themes of oppressive rural lifestyles, and certain phrases and sayings commonly used in the early to mid-20th century and in blue collar environments. ... more on Wikipedia

Isaac Brock is ranked on...

#619 of 854 These Poetic Geniuses Wrote Your Favorite Songs of All Time 358.6k VOTES If you ask anyone who has ever tried, it's tough to write one song, nevertheless a batch to be considered a songwriter. Add ...
Famous Banjo Players 218.2k VIEWS Famous Banjo Players, with photos, is a list of the best known banjo musicians in the world. These are musicians who are mas...
Famous People Named Isaac 24.6k VIEWS List of famous people named Isaac, along with photos. How many celebrities named Isaac can you think of? The famous Isaacs b...

Isaac Brock is also found on...