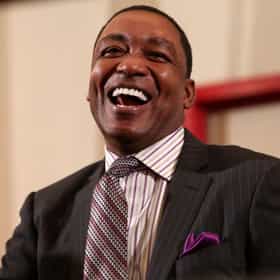 Isiah Lord Thomas III (born April 30, 1961) is an American former basketball player who played professionally for the Detroit Pistons in the National Basketball Association (NBA). A point guard, the 12-time NBA All-Star was named one of the 50 Greatest Players in NBA History and inducted into the Naismith Memorial Basketball Hall of Fame. Thomas has also been a professional and collegiate head coach, a basketball executive, and a broadcaster. Thomas played collegiately for the Indiana Hoosiers, leading them to the 1981 NCAA championship as a sophomore and declaring for the NBA draft. He was taken as the second overall pick by the Pistons in the 1981 NBA draft, and played for them his ... more on Wikipedia

Isiah Thomas is ranked on...

Isiah Thomas is also found on...