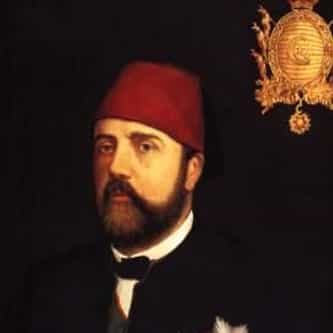 Isma'il Pasha (Arabic: إسماعيل باشا‎ Ismā‘īl Bāshā, Turkish: İsmail Paşa), known as Ismail the Magnificent (31 December 1830 – 2 March 1895), was the Khedive of Egypt and Sudan from 1863 to 1879, when he was removed at the behest of the United Kingdom of Great Britain and Ireland. Sharing the ambitious outlook of his grandfather, Muhammad Ali Pasha, he greatly modernized Egypt and Sudan during his reign, investing heavily in industrial and economic development, urbanisation, and the ... more on Wikipedia