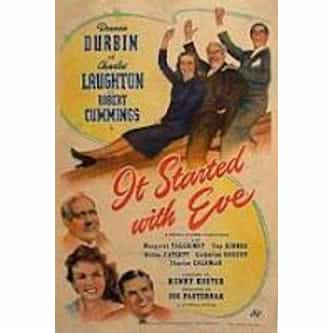 It Started with Eve

It Started with Eve is a 1941 American musical romantic comedy film directed by Henry Koster and starring Deanna Durbin, Robert Cummings, and Charles Laughton. Based on a story by Hanns Kräly, the film is about a man whose dying father wants to meet his son's new fiancée, but she is unavailable, so he substitutes a hatcheck girl. Complications arise when the father unexpectedly recovers. The film received an Academy Award nomination for Best Original Music Score. The film is ... more on Wikipedia

It Started with Eve IS LISTED ON